Perhaps because they've run out of things to say on every other topic, the presidential candidates are now pandering to the voting bloc that believes that vaccines cause autism. Here are recent quotes:

It’s indisputable that (autism) is on the rise amongst children, the question is what’s causing it. And we go back and forth and there’s strong evidence that indicates that it’s got to do with a preservative in vaccines.

The science right now is inconclusive, but we have to research it.

And Clinton jumps on the bandwagon with:

I will ensure that all vaccines are as safe as possible for our children by working to ensure that Thimerosal and mercury are removed from vaccines.

Um, Hillary, I know you were kind of...well... busy back then, but Thimerosal WAS removed from all vaccines in 1999.

Please, candidates, please don't do this. There is no credible scientific evidence that vaccinations cause autism. Focusing on this issue - pandering to a tiny, angry and vocal minority - is just plain distracting. It scares people into not vaccinating their children, which will create a public health nightmare.

Here. I'll help you with your next sound bite.

We need to increase resources for autism research so we can understand the origins of this condition, but we also need a health care system that helps families get the treatments and therapies they need for their children. We need to provide access to early intervention services that are proven to make a difference in a child's level of functioning, and we need to build a society where we can accept and celebrate differences of all kinds and where people are not defined by their disabilities.

Feel free to use that.

And please be careful to whom you pander, because with 1 of 166 children being identified as having an autism spectrum disorder, it might not be too many election cycles before you start seeing this bumper sticker:

I'm Autistic and I Vote.

Ben decided to wear his new propeller hat this morning during a stop at Whole Foods Market in Oakland. 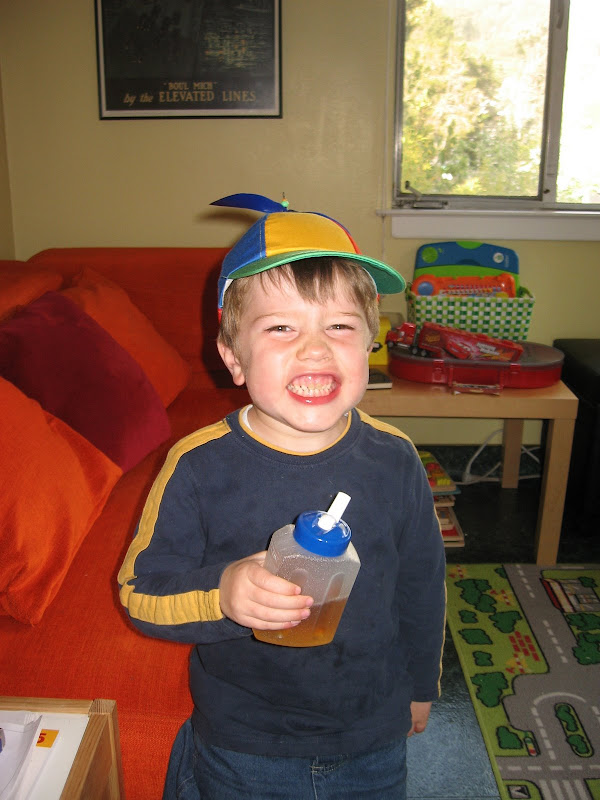 The hat elicited a smile of approval from author Michael Chabon whom we passed in the bakery section.

I'm sure the mere fact that I recognized him lands me squarely in the progressive-bookish-geek-latte-Obama demographic. I have to confess I felt positively GIDDY.

I have to remember this anecdote for when Ben is eleven and reading Summerland.
Posted by Christa at 11:48 AM 3 comments:

He really only reads the cartoons

I found Ben sitting with a stack of New Yorker magazines this afternoon. 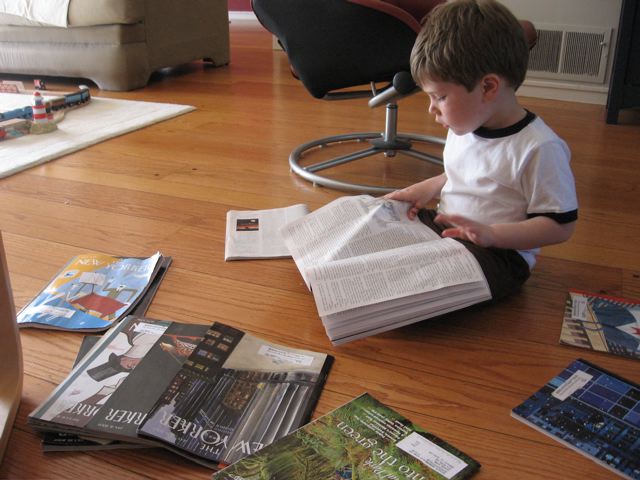 I suppose this might explain why he's been going on and on about Eliot Spitzer, wanting to discuss the book, The Myth of the Rational Voter: Why Democracies Choose Bad Politics, and asking us when we're getting tickets to the new revival of "The Seagull."
Posted by Christa at 9:24 PM 4 comments:

The future's not ours to see (que sera, sera)

It’s a question every parent asks themselves now and again, but one that I actively avoid.

Around the time that Ben’s condition became an official, professionally validated thing, I remember a whirling, sick feeling as I was wondering, “What does this mean? Will he go to college? Will he be able to live on his own? Have a ‘normal’ job, Have a committed relationship?”

These thoughts are common for many parents in that post-diagnosis period. Whether the realization sinks in slowly over time or a professional passes swift judgment, there’s a turning point where you say, “Okay. It’s official.” Where suddenly you feel like you’ve awoken in a different world.

But I know now that it’s not a different world. It’s the exact same world, and your child is the exact same child he was before someone attached a label, and you love him just as much as you did yesterday.

So I snapped myself out of that whirling, sick feeling by deciding that I would not speculate on Ben’s long-term future, but concentrate on the here and now.

This is not, let me tell you, my strong suit. I am a black belt in worse-case scenario generation. I actually enjoy planning and forecasting to the extent that I think I should list it on Facebook as an interest.

But I’ve been able to let go, for the most part, of worrying about Ben’s future.

I watched this piece that aired on Nightline about going through adolescence with Asperger’s. The video features profiles of Daniel, a college student and Noah, a middle school student and their struggles and successes with surviving adolescence on the spectrum.

After I watched it, I could not stop thinking about these two young men. I felt so drawn to both of them and was moved by how articulate and conversational they were – not what we’re generally led to expect of an individual on the autism spectrum. They struck me as kind and gentle souls – the type of people we need more of in the world.

But I also was immediately aware of those very subtle things that made them different.

Daniel and Noah are probably 80% similar to their peers and 20% different. But ratio might as well be flipped to 20/80 when it comes to how they are perceived in a world where conformity and perfection are expected.

I acknowledged – reluctantly - that I would probably pick out and focus on these differences, too, if I encountered an individual like them in the workplace, in a job interview, at a dinner party or other social gathering.

And I thought about the way I use to dread meetings with a programmer I worked with once (who now, in retrospect, I suspect has Asberger’s) because his constant, lengthy dives into unnecessary minutiae exhausted me and frustrated me. His inability to censor himself drove me crazy. I admit avoided him when I could.

And lately I’ve started wondering about Ben. Will people know, immediately, that there is something about him that does not conform? More importantly: will that limit him?

Or are the real limits really just my own perceptions and expectations for him?

The authors of two of the blogs that inspire me on a weekly basis, The Family Room and Good Fountain, each have posted on that same question, so there must be something in the air.

Here’s Susan of The Family Room:

When it comes to the whole "normal" thing, we've gotten a bit of a free pass up to this point. After all, a quirky four-year-old is cute. But an older child? An adult? That's an entirely different proposition. And so we are back to the eternal question of what is "quirkiness" (lovable eccentricity) versus "disorder" (off-putting). It's a value judgment, plain and simple.

Maybe with all of the mainstream media attention that autism is getting these days – autism now has its own day, after all, like Mothers and Flags - the world will be a gentler, more accepting place for Ben than it has been for Daniel and Noah. Maybe the world will be more able to embrace that quirkiness rather than seeing it as a disorder.

So at the moment, I’m still amused when Ben, for example, spins around in circles when he’s trying to listen intently as I describe the plan for the day. If he’s still doing that at 12, well, we’ll cross that bridge when we come to it.
Posted by Christa at 9:27 AM 8 comments: