It's been a summer of contradictions.

Ben's social and language skills have taken off like gang busters to the point where it feels like he is actually having conversations with us at times. While he is still somewhat echolalic, it seems wholly intentional now: something he is choosing to do for fun and play, rather than something that he does to retreat inside himself or as a substitute for spontaneous language.

He's spent the summer in a mainstream preschool environment with two wonderful teachers who leverage his strengths, adapt their communication style to his needs, and respond with compassion to his challenges.

I would go so far as to say that in some ways, Ben is now within an acceptable standard deviation of a typical four and a half year old.

But as Ben's social skills develop and as he finds himself more comfortable joining the wild world of preschool playground politics, certain aspects of his personality become exposed, and he becomes much more vulnerable.

When he used to spend most of his time at school playing by himself, his extreme rigidity and need for control was hidden in plain sight. Walking around the playground perimeter by himself, reciting a story, allowed him to exert control over his world and avoid the unpredictability of other children.

Now, the social urge we always knew to be there is backed up by the language and play skills he needs to join in. But when he does, he becomes quickly upset when other kids don't do what he wants, or don't respond to his orders the way his trains do.

A little girl at a playground is shoved when she is piling wood chips on a swing in a way Ben finds unacceptable.

A playmate is hit when he doesn't say "goodbye" after Ben repeatedly waves and yells goodbye to him.

A classmate is scratched to the point of bleeding when he tells Ben he can't come in the play structure with him.

Another playmate is pushed when he unknowingly enters the space Ben has established as the castle in the story he is methodically acting out.

A boy is kicked when he pushes the button in the elevator before Ben.

And that's just in the past week.

It's not only play with other children that brings out this rigidity, but other unexpected turn of events as well.

The worst episode Ben had this summer was when a new staff member at the school (who had no information about Ben's challenges) was pouring water from a pitcher for Ben to have a drink. Some water spilled on the table.

Ben threw the pitcher, went after the teacher, and proceeded to tear apart the classroom before a more experienced staff person got a hold of him.

My impression was that there were a lot of things that contributed to the outburst beyond spilled water - it was simply the final straw - but things like this make me feel utterly helpless. Especially when there is another child hurt, another parent or adult who is distressed.

I become completely forgetful of the progress he has made. I forget that he will sometimes take deep breaths to calm himself down, that he can sometimes redirect himself with minimal prompts, that he reaches out for help more often, and expresses his feelings more easily.

My instinct is to protect him, but I can't. How else will he learn flexibility except by being in the world with all its spilled water and other injustices?

And how do you write an IEP goal that measures mellowing out?

Tell it to the Shampoo

The other night at bath time, Ben and I somehow ended up endowing our bottles of shower gel, shampoo, conditioner and Burt's Bees Bath Soap as characters in an adventure drama that involved a variety of water rescue scenarios.

Ben played with them as if they were action figures, giving them voices and making them fly through the air, swim in the tub and have the kind of conversations that Ben has just been learning.

"Hi, Shower Gel. Will you play with me?"

The next night, I accidentally pinched his finger in a bathroom cabinet, and through his tears, told me over and over again, "I want to call Laura and tell her what happened!" Ever since the balloon incident, when something traumatic happens, he wants to tell somebody about it - usually his teachers Laura and Gladis. The urge usually only lasts a moment, but this time he was more insistent.

"I think Laura's asleep already," I said, appealing to his sense of reason.

I stalled, not knowing how to redirect. Then, he came up with something different on his own.

"I want to tell Burt's Bees and Shower Gel and Shampoo and Conditioner what happened."

We went to the bathroom and I lined the bottles up on the edge of the bathtub. He sat on my lap and instructed me to have Burt's Bees ask him what happened.

"Mommy pinched my finger in that door." he began, pointing to the cabinet.

The bottles (me, talking and wiggling the bottles) and Ben then had a talk about accidents and how to feel better.

"Sometimes I hurt myself when I'm running," he confided towards the end of the conversation. "I need a band-aid and I find a grown-up or a teacher and they will give me lots of hugs and I will feel better."

We said good night to the bottles, but not before giving them a quick ride in a race car and a rocket ship. "I'm all better," Ben announced cheerily as Chris poked his head in the door.

Many parents might be worried if their child started talking to the toiletries, but I'm elated.

I think I've just found the cheapest live-in speech therapists on the planet. 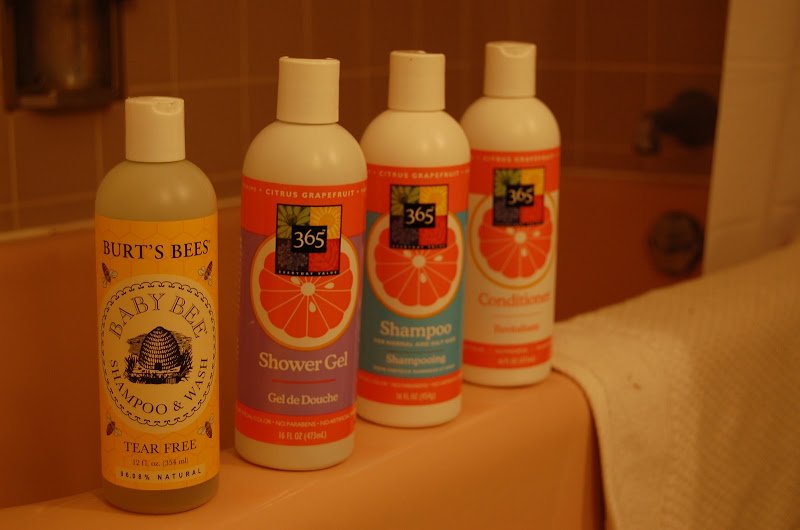 Among Ben's collection of quirky superpowers, perhaps my favorites are those that showcase his astonishing visual and aural memory. To put it in less clinical terms, I believe he is well on his way to becoming a supreme film geek.

Lately, he'll request that we play the soundtrack from the movie Cars on the stereo - particular tracks, of course - so he can use his collection of Pixar toy cars to choreograph specific sequences from the film.

I'm pretty sure this makes him the only four year-old aficionado of Randy Newman's orchestral film scores.

I've written about Ben's love of recreating camera angles that he's seen in videos. He does the same thing in this activity. He is the director: with the soundtrack precisely matching the action, quoting lines of dialogue at just the right moment, often positioning his head at the proper angle so that he sees the scene the way it appears in the film.

Unfortunately, this talent does NOT really come in handy at preschool. But it just might once he hits junior high.

It makes me think of a story I had read about not long ago about a group of kids who, in the 1980s, worked diligently for seven years on a shot-by-shot recreation of Raiders of the Lost Ark. This, from the LA times story about a recent screening of the film:

The legend of the film is well-known in Indy circles. In 1982, three friends -- Chris Strompolos, Eric Zala and Jayson Lamb -- got together to begin a shot-for-shot re-creation of "Raiders," a film that had been released just a year before. Their ambitions were huge -- they committed to re-creating every single effects shot, including the giant rolling boulder at the film's beginning.

Hampered by the budget constraints of a 12-year-old's allowance and unhappy parents who learned they were setting each other on fire, the film was shut down and restarted several times over the course of seven years. In August 1989, the now 19-year-old friends finally had their premiere screening.

I only hope that when Ben gets older he finds a group of like-minded fanboys who will want to recreate whatever movie they are crazy about at the time.

In 1982, I was in ninth grade and spending a lot of time hanging out with three guys who, like Strompolos, et al, were crazy about Raiders. We were all in drama club together, wrote and performed skits, and made super-8 movies together. Our projects may not have been as ambitious, but the demographic was the same.

Turns out the guy I ended up marrying was, in 1982, a half-continent away, doing pretty much the same thing with his friends.

And now, we have Ben. May the circle be unbroken.
Posted by Christa at 10:48 PM 3 comments:

This summer, Ben has a couple subtle, but powerful additions to his evolving social language toolkit.

He has this new chuckle that he uses when he knows something is funny but he's not necessarily laughing spontaneously, or when he wants to signal us to laugh at something that he's saying. The chuckle sounds very much like a combination of Ernie from from Sesame Street and Enos from the Dukes of Hazard.

He's sprinkling his sentences with filler words like "well" and "so" and "okay." Since Ben's language evolved from echolalia, this has never come naturally to him. It reminds me of the many bits of speech we take for granted; and that its these non-signifying bits that give conversation its, well, like, spontaneous feel.

(While acting out the story "The Hat")

(While playing with a new Sesame Street feltboard)

When he wants me to stop talking or is trying to distract me from directing him, he'll come close and say softly, "Mommy, will you kiss me?" He's realized this is a very powerful way to shift the tone of the conversation, as well as my mood.

A few nights ago, we heard a crash from his room. We rushed in to see he had dumped out the bin of Thomas engines onto the floor. Keep in mind that he has dozens of engines so it's pretty loud. Also keep in mind that this is something he had just done earlier in the day as part of a robot rampage, so we rushed to the scene.

Turns out he had just dumped out the bin the way most kids compulsively dump out bins - just to get all the things out. He was calm, but surprised to see us at the door with worried looks on our faces.

"What are you doing, Ben?" I asked, just to clarify that what I was seeing was indeed benign.

"Oh, nothing," he said with a tone so perfectly reassuring that he had to have been quoting something.

Then he quickly put the bin over his head and smiled. "I'm just...wearing this... as a HAT!"

Not only has he mastered charm, but he's moved on to farce.

And we suddenly felt as if we had been thrust into an episode of Faulty Towers and that at any moment a Vicar would crawl out from under the bed.
Posted by Christa at 7:45 AM 4 comments: