One of the best pieces of parenting advice I got when I was still pregnant was from my long-time friend Diane, who already had two kids of her own.

Never, she advised, look at another child who is doing something annoying or disturbing and think, smugly, "Well, at least MY child doesn't do THAT."

Because if you think that, you are pretty much guaranteed that your child will start doing that very thing within the next few days.

As you can probably guess, there's something I've had that feeling about.

Ben has been slow to develop the normal male fascination with fighting and weaponry. I'd love to take the credit and say it's because we provide such a warm and nurturing environment, but I know that it's really because children on the autism spectrum don't automatically pick up behaviors from peers like most NT children do.

No matter what the cause, I admit to a few moments of smugness about it.

But as his social abilities evolve, he now pays a lot more attention to what other boys do on the playground and wants to fit in. This is progress.

This also means that he's starting to learn about things like fighting and good guys and bad guys.

Ben is paying attention to the concept more in videos and stories, too, and incorporating them into our imaginative play.

One of his new favorite activities is to get out the Nerf baseball bats and play Robin Hood and Little John dueling with staffs on a narrow bridge.

He also loves to play the orchestral soundtrack from Disney's Sleeping Beauty and act out the climax where Prince Philip destroys Maleficent.

You can probably guess who plays which part. My death scene, where I sink to the kitchen floor with a wooden spoon in my heart, is quite a scenery-chewer.

I know it's pretty intellectual stuff compared to Power Rangers or Ninja Turtles, but given the fact that this was completely absent from his repertoire until just a month or so ago, it's striking to me.

As Ben's fascination has grown, we haven't made a point of censoring stories where heroes are in danger and villains are vanquished. (Within reason, of course.)

While we don't want to encourage fighting, we also don't want to shield him from the idea of conflict. Experimenting with ideas of conflict, power, and aggression seem like a normal part of childhood - especially boyhood - that Ben is finally getting around to exploring.

Back then, we both believed that gender was nothing more than a construction of oppressive social norms. I cringed at - no, railed against - any biological basis for behavior.

But, of course, that was before I had spent time with any actual children.

Unlike my college-age self, I don't believe that you can just raise boys and girls to be happily, perfectly genderless. There is some wiring in there that does make the sexes fundamentally different.

Of course, I don't agree with Freud that "biology is destiny," but maybe biology is "tendency."

Right now, he moves around on the gender continuum with ease. No one (at least not when I'm around) tells him what boys should or shouldn't play with and that's the way it should be.

But I believe that he will have a tendency to explore concepts of his own physical power, ideas of competition and notions of strength in ways that are different than the way his female peers will tend to explore the same concepts.

Unlike my younger self, I'm reconciled to this.

And given his rather circuitous social development (we're taking the scenic route, as Susan at The Family Room says), I'm actually quite pleased to see it.

So every day we're fencing with wooden spoons, bats, plastic golf clubs, and even socks. And we laugh all the while. It feels fun, normal and harmless.

Oh no. I should NOT have said that. 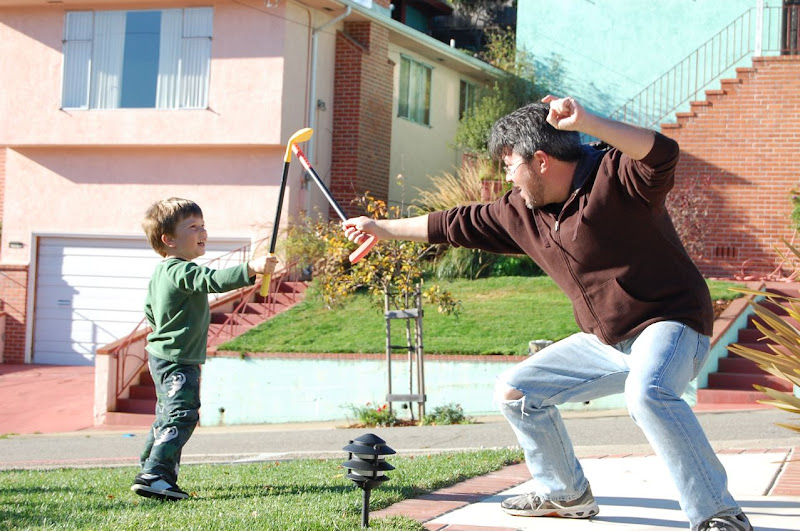 If you've landed here because you typed words like "melatonin" and "sleep disturbance" and "autism spectrum" into your search engine, welcome.

I hope I can provide some information I would have loved to have had a couple years ago.

Here's our story of sleep:

Ben slept relatively well as a baby. But after his first birthday, he would go through periods every few weeks where for several nights in a row he would wake up around 2 a.m. and want to be held.

He would just lie in my lap, eyes wide open, for hours at a time.

And though we had successfully used the dreaded "cry it out" method to get him to go to sleep independently, I admit that I did not have the strength of character to go through this exercise at two in the morning. So I would sit with him: waiting, waiting, waiting for him to fall back asleep.

As he grew, the pattern remained: several weeks of sleeping through the night, then four or five (or more) nights of wakefulness.

At times, he would wake up in the middle of the night and ask to read books together or recite stories on his own at full volume and at middle-of-the-afternoon level of enthusiasm.

As he became more verbal and as his imaginative play skills kicked in, bedtime became his most creative and interactive time of the day.

And because he was actually asking me to play with him (gasp!), I often let him stay up way too late just because I was amazed and delighted by his emerging social antics.

But the playing he did at night sometimes had an almost frantic quality to it.

Often, he would walk in circles around a table in his room, reciting a story or making one up. It seemed as if his brain was propelling his legs, or vice versa, and that he was unable or unwilling to turn his brain off.

Eventually, much too late, he would wear himself out and fall asleep.

I had read on the Hyperlexia Parents' Network discussion group about how many families with kids on the spectrum used this natural supplement to help with sleep disturbances.

When I couldn't find anything on the internet that suggested any dangerous side effects, I ventured to the supplements aisle in Whole Foods.

Second guessing myself, I decided to ask a Whole Foods employee about it. She looked shocked. "Oh, I would NEVER give this to children. Children make enough melatonin on their own and they don't need it. You should try valerian root instead."

I slinked away, feeling like a terrible parent who was about to give my kid Valium. So I bought the valerian root. It tasted awful and had no noticeable effect.

With renewed self-confidence, I went back and bought the melatonin.

The first night we gave it to Ben, he had a meltdown on the bathroom floor shortly after he took it. I felt awful. I'm drugging my child, I thought. But something kept me from rejecting it outright.

We tried it again, off and on, for several weeks. The effects seemed to get more consistent, more gentle. I tried to compare nights with and nights without and soon a pattern emerged.

So: now he takes one 2.5 mg tablet (orange flavored, like baby aspirin) every night after bath time or as he's putting on jammies. Then he plays in his room or reads or listens to a book on tape for no more than 30 minutes, during which time he gets gently and gradually more calm and sleepy.

Then, at some point, he just crawls into his bed - on his own. We turn out the light and - presto - he falls asleep and sleeps through the night.

But here's the thing: I don't believe that the melatonin is drugging him into falling asleep.

I believe it has helped him learn what a tired feeling feels like and what he can do about that.

For whatever reason, I don't think he allowed himself to experience this before. My theory is that the melatonin makes his sleepy feeling strong enough that he can't ignore it, but not so strong that he is completely powerless against it.

The melatonin allows him to be mindful of falling asleep and participate in that process. Case in point: he closes his eyes now BEFORE he falls asleep, which he never did previously.

The best part for me is that I can predict, with some certainty, how long our bedtime routine will take and know that I won't be up for 2 hours, roped into a late-night production of Finding Nemo.
Posted by Christa at 2:54 PM 4 comments:

So much has been written. There's not much more to say about this week's historic events, but I will tell you our story all the same.

This past Tuesday night, I hugged Ben as he sat on my lap and we both watched as the news networks broadcast that Barack Obama would be our next president.

We had been briefing him on what an election was. "All the grownups get to say who they want to be president. That's the person who is in charge of the whole United States of America," we explained. "And Mommy and Daddy want Barack Obama to be president."

Several weeks ago, Chris had showed me this video on his iPhone by hip hop artist MC Yogi. It's catchy and stylish and makes use of a final line in one of Obama's speeches - a brighter day will come - to great effect.

Ben wanted to watch it, too. He watched it many times in a row that night with his usual fascination for anything that combines on-screen text and rhythm.

So back to Tuesday night. I held him on my lap and pointed to the text on the TV screen. "Barack Obama is going to be the president." He looked at my face and studied my tears and smile, somewhat puzzled at the two appearing simultaneously.

"Barack Obama is going to be president!" he echoed excitedly. Then, quietly and unprompted, perhaps remembering the video or perhaps just wise beyond years said, "A brighter day will come."