This past Sunday, I saw Ben fiddling with one of his teeth when suddenly he was holding it in fingers.

I'm not sure which one of us was more shocked at the slightly bloody gap in his mouth. I wasn't expecting him to start losing teeth this early. My first thought was that he had knocked a tooth out by accident.

His dental precociousness shouldn't come as a shock. This is a kid who got his first tooth at four months.

I was amazed at how quickly Ben progressed through shock, panic, and sadness to curiosity:

I found a tiny box for his tooth and in about fifteen minutes, he was happily playing again.

What's astoundingly lucky for everyone is that we had just rented an Elmo's World video that includes a "Teeth" segment. It features Andrea Martin as the voice of the Tooth Fairy, explaining the whole lost tooth ritual.

He's also seen a Yo Gabba Gabba episode about teeth that features Amy Sedaris as the Tooth Fairy.

So thanks to television and two superb comic actresses, Ben knew what to expect.

We acted out the Tooth Fairy visit several times that day, with the little box and a quarter. But when bedtime came, Ben was not quite ready for a visit from you-know-who. He wanted to keep the tooth in the box on his dresser rather than put it under his pillow.

Every night since then, he asks, "Where is my tooth?" I show him the box and ask if he wants to put it under his pillow so that the Tooth Fairy will come.

"We can ask her to leave your tooth and not take it with her. Do you want her to come tonight?"

"No. I want her to come a different night."

Five days later, and the tooth is still on the dresser.

Yesterday, Ben asked, "Is the Tooth Fairy real or pretend?"

He skipped out of the room. That was enough for him for now.

Until the next tooth, which is now wiggling away next to the little pink gap in his smile. 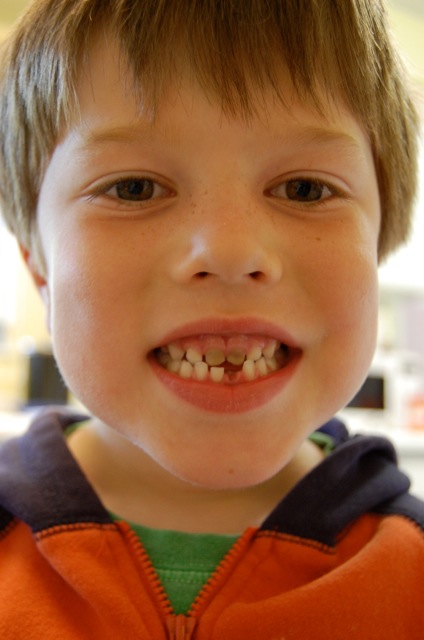 Project Spectrum: Strengths of Autism Shine Through in 3D

But it turns out that Google was getting a lot of phone calls and emails from families of kids with autism explaining how much their children loved using it.

Google looked into the phenomenon and realized that the software actually helps people who are gifted with visual and spacial thinking - as many individuals with autism are - express that talent in ways that pencil and paper might not.

So they created a program to show teachers how to use Sketchup as a tool to inspire and facilitate creative expression with kids on the spectrum.

Ben might still be a bit young to experiment with this, but I'm completely intrigued by the videos and plan to introduce it to him at some point. I think there are some 3D railroad layouts in our future.

(A note of thanks to my new colleague Adam N. in New York for pointing this out to me.)

Elsewhere on the interwebz, check out Hyperlexicon fave Paul Collins' most recent blog post for not one, but two click-worthy links.

First, he has a nice article in Cookie magazine about hosting an autistic child at a birthday party (which works well, I might add, as a counterpart to my birthday party essay that was recently resurrected.)

Second, he links to a research article that explains why individuals with autism experience an improvement in communication abilities during episodes of fever. To which most parents of children on the spectrum will say, "I told you so."
Posted by Christa at 3:07 PM 1 comment:

I'm very honored to have an essay from this blog appear in the first issue of a new online literary journal, Hyperlexia.

As editor Kerry Cohen writes in her Editor's introduction, Hyperlexia Literary Journal began as a question: What does it mean to be autistic and to love someone who is?

This first issue showcases a mix of poetry and prose, including a piece I wrote in the early days of this blog: To the Parents at Today's Party.

Having the piece selected gave me a welcome opportunity to revise it. In the process, I recognized that I find myself in the difficult situation I describe in the piece far less frequently these days due to Ben's progress, my own acceptance, and the sense of community and shared experience I have nowadays thanks to so many of you.

Instead of rewriting the piece from a place of here and now, self-aware reflection about what the feelings meant back then, I decided to keep - and even emphasize - the cheerful-yet-defensive voice of the original piece since I think it captures an honest moment of emotion that is familiar to most every parent.

I'm very excited to be included along side many other wonderful writers, and I hope you enjoy the inaugural issue of Hyperlexia.
Posted by Christa at 7:20 PM 8 comments:

At the dinner table tonight, Ben and I made up a social story about Ben and "N," an older boy at school. We made our fingers into little people that acted out a scene on the placemat.

In our story, "N" was playing too aggressively with Ben and Ben was saying, "I don't like that. That's not nice. I'm not going to play with you right now." Then the Ben fingers walked away.

Small steps on the journey of self-advocacy.

The Dan Marino Foundation, Kent Creative, and the Autistic Self Advocacy Network have created a series of powerful public service announcements called "No Myths."

I have many hopes and dreams for Ben, but by far, the greatest one is that someday, he will stand up and advocate for himself with the pride and strength of the individuals in this video.

Schools take a Spring Break right about now, but workplaces do not. Luckily, Ben's afternoon program provides childcare for all of us who have to keep working while teachers get a well-deserved vacation.

Childcare means a little less structure and routine for Ben and a little more stress for me, wondering how he will fare all day with his 5-going-on-14 typical pals and non-French speaking teachers.

Today started out with Ben walking into the classroom and initiating some brilliant imaginative play, pretending a block was "pie" and offering the pie to his friends and the teacher. He got a long cylindrical block out of the pile and announced, "I'm going to use this to roll the pie" and pretended he had a rolling pin.

Then a couple of boys came over and, right in front of me, told Ben they wanted some of his pie and then pretended to give him some pie that they announced, in a mean spirited way, was actually 1) mud and 2) poop.

But to be mean to a kid in front of his mom seemed pretty audacious and provocative, even for five-year-olds. And I spent the morning contemplating things I could have/should have said.

(Best suggestion from a Twitter friend: "Tell them there's no Santa Claus.")

Ben did not appear offended and continued playing. At one point, he gave his pretend rolling pin to another boy and explained to him, "I turned this rolling pin back in to a light saber for you. I know you like those."

It made me want to stand up on a table and shout, "Excuuuuse me! Thoughtfulness, creativity, perspective taking... Hello, people! My kid is more advanced and socially appropriate than any of you snotty little cretins."

Later, when I came to pick Ben up, it was story time: Harold and the Purple Crayon. I came in just after the part where Harold was finishing his picnic of "nothing but pie."

Ben's hand shot up and the teacher called on him.

"I like pie. I know a story called Samurai Pie. It's on Mission to Mars. That's a show on a DVD."

He looks over at me and doesn't miss a beat.

Now, Chris and I have discussed the fact that we both were Compulsive Hand-Raisers in elementary school. Each of us was always the one in our classroom desperate to offer our important insights on every topic.

We knew that Ben would follow in our footsteps, but we figured it would be in like, second, maybe third grade. I had no idea he even knew he was supposed to raise his hand before talking and there he was: perfect posture with his arm shooting up like a ramrod.

When the teacher got to the next page, Ben's hand shot up again. She said in a tired voice as if this had been happening since long before I got there, "Ben, I'm not going to call on you until the end of the story."

"C'mon. Why not? Clearly, none of these kids has has anything to say. Why not call on him?"

But I didn't say that either.

Ben wasn't upset he didn't get to make his point.

Maybe because he seems to be learning that sometimes you get to talk in class and sometimes you don't and it all seems arbitrary or just based on how tired the teacher is, and kids will tell you that they just made you eat mud and poop and laugh at you and you walk away and keep playing and keep raising your hand.

And I guess that's inclusion, in a weird, scary way.