A class project designed to teach emotions, displayed at Open House last night, pretty much captures the way we feel about Ben's school year at Tilden as it draws to a close. 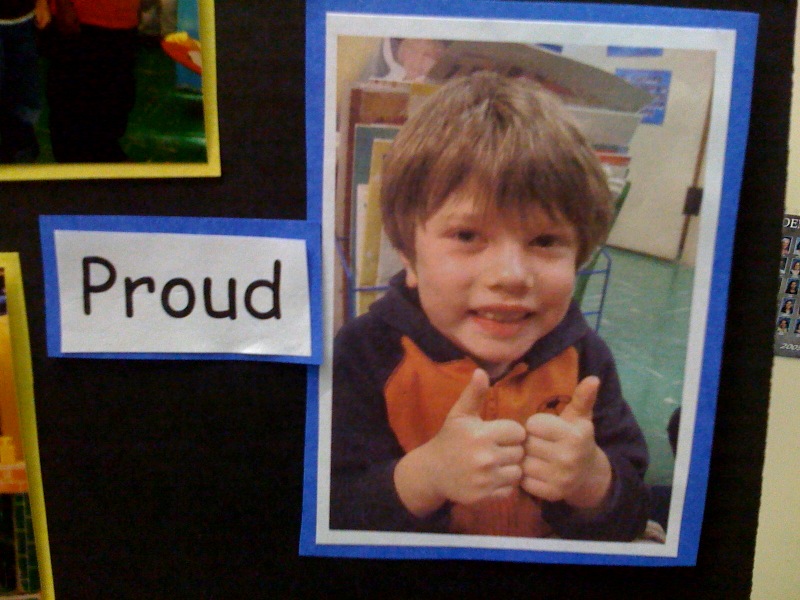 My mind is occupied lately with the vast unknowns ahead of us: summer, kindergarten. New schedules. New teachers. New friends. New challenges.

But it's nice to be reminded that we made our way through this year, which once was new and unknown. And landed for the moment on this square: Proud.

The scene is a playground at a school. A teacher who recently had a baby has come back to school to say hello to her class of 5 and 6 year olds.

One boy doesn't look up from his legos when she arrives and only barely grunts with acknowledgement when another adult draws his attention to the teacher.

Another boy runs from across the school yard, gives the teacher a hug, examines her now-smaller belly and shouts, "I'm SO proud of you! You had your baby!"

Which of these boys has a diagnosed communication disorder?

You see the twist coming, don't you?

The second boy in the story is Ben. A child who has an official diagnosis that states that he has a disability: "a marked impairment in social interaction," that interferes with his ability to function in a educational or social environment.

The first boy is one of his typical peers.

I'm not telling you this story because I dispute Ben's autism spectrum diagnosis, or believe that the other boy has some kind of undiagnosed disorder.

I simply want to acknowledge the murkiness and complexity of having - or not having - a diagnosis, a label, or the status of "disability" attached to one's differences.

I do believe that Ben's differences are real and what he has is a lifelong condition, not a developmental phase. As our school psychologist reminded us recently, "It gets A LOT better, but it never goes away. And the impact changes across one's lifespan." Ben will probably struggle his whole life with stuff that is pretty basic for most people.

But like the story demonstrates, his diagnosis does not and cannot define him, and he continues to frequently defy its boundaries.

For Ben, the degree of his challenges - his disability - is directly related to the expectations and norms of the environment in which he operates. And the idea that he has a disability may say as much about his environment as it does about him.

This importance of context and environment is obvious to most parents, regardless of whether their child veers in an atypical direction or not.

For example, Ben's behavior issues are rare to non-existant in his language enriched classroom with a high teacher/student ratio and adaptive teaching methods.

On the other hand, he has more frequent instances of aggression and acting out in the classroom with double the number of children, less structure and a vastly different teaching style.

So does he have a "disability" in one environment but not the other? No. But it's possible to minimize the effects of a disability by changing the nature of an environment.

For example, what if elementary school classrooms had seven or eight students in a classroom rather than 30?

What if every teacher received rigorous training in adapting curriculum to a variety of different learning, communication, sensory needs?

What if every child at every level had age-appropriate education focused on social and emotional development woven into the day and into the curriculum? Imagine if this had as high a priority as reading and math and - gasp - standardized tests.

I suspect that in this kind of environment, it's less likely that Ben's differences would be viewed as a disability or that he would need "special" education.

I suspect a lot fewer students, especially those who perch on the mild end of the spectrum, would need "special" education.

Maybe there are so many students who qualify for special education services and get labels attached to them partly because our public school classrooms and teaching methods are often a poor match (if not intolerable) for too many children.

What if we could improve the environment for all children - for those with official diagnoses and for those without, for those who struggle for all sorts of different reasons that don't have a corresponding checkbox on an official form. Not just for kids with disabilities but for the countless kids who who find a way to muddle through and get by, but possibly never thrive.

Where does the disability reside? With the person who manifests differences, or with a system that's too rigid to accommodate them?
Posted by Christa at 12:53 PM 6 comments:

Thoughts (not feelings) about empathy

I’ve been thinking a lot this week about empathy.

Maybe it’s because of this article on a new theory that people on the autism spectrum experience the feelings of others so deeply and intimately that they are overwhelmed and as a result, tune out or go inward.

This contrasts with the common belief that autism causes individuals to be entirely removed and unaware of others’ feelings, or to lack empathy.

And maybe it’s because of all the talk in the news about the Supreme Court nomination: President Obama’s statement about wanting to pick someone with “empathy” and the various media conversations that followed.

And maybe it’s because of John Dickerson’s article on Slate called The Logic of Empathy: How Obama is Like Spock. He reflects on the ways in which the president exhibits empathy and how that's not necessarily inconsistent with his famously cool, analytical and perhaps even Spock-like demeanor.

And it’s definitely because I’ve watched Ben in situations where he has shown he is developing the ability to anticipate and imagine what others might be thinking, which is one component of empathy.

But back to that autism article for a moment. Because I have a quibble.

I completely buy the premise that this strong response to emotional situations is not uncommon for those with autistic traits. I've seen it with Ben lots of times.

For example, we occasionally let Ben try out a violin that belonged to my great-grandfather. Last night, he became upset that I had repeatedly reminded him not to touch the bow hairs, and he yanked it to show his anger. My sharp and clearly emotional response (to almost having a 100-year old violin thrown across the room) triggered a now-infrequent robot-rampage-style meltdown.

I know that his response wasn’t just because I set a limit; it was how I lost my composure when I did it.

However, I’m not so sure I would, as the article suggests, call that “empathy.”

It seems like empathy refers to the ability to place oneself in the mindset of another to imagine and predict how they might behave, how they might feel. This is an analytical activity, a sort of detective work, and it may or may not elicit our own emotions.

Empathy is useful. It helps us make better decisions, respond to others’ needs, and alter our behavior based on what others might be feeling or thinking.

But being fearful and overwhelmed emotionally by the perceived feelings of others isn’t necessarily analytical, nor is it useful. And judging from the comments on the article from adults on the spectrum who've experienced this, it certainly doesn't sound like much fun.

When Ben is using his emerging “theory of mind” - or empathy - he is in control of the situation. When he is reacting strongly to others’ emotions, he is not.

An example of empathy is when Ben asked my mom to leave him alone in his room with his trains, but sweetly complimented her as she was leaving, saying, “Grandma, I love making cookies with you.” He predicted her disappointment and decided to soften the blow with kindness.

Contrast this with when Ben once hit another mom (a stranger) at a playground when she sharply and loudly reprimanded her child. I would not classify this as empathy for the other kid.

I don’t see Ben’s atypically slow emergence of empathy and theory of mind and his tendency to react with anxiety to the emotions of others as mutually exclusive, as the article nearly suggests.

But I do wonder if they might be related.

As the cognitive, analytical ability for empathy develops, does the overwhelming un-separateness of others’ emotions fade? And can we help that process along if we understand that these tendencies can be translated into strengths?

To go back to the Star Trek analogy, can we encourage a modified Spock rather than Deanna Troi?

(And really, wouldn't you rather go into battle with Spock than an Empath anyway? “Pain! I’m feeling pain, Captain!”)

Ultimately, that’s what I want for Ben: for him to be able understand another’s perspective – with compassion - rather than to be so fearful and overwhelmed by strong emotions that he has to shut down or act out.

Or to borrow from John Dickerson’s article, empathy might not be Bill Clinton’s “I feel your pain” as much as it is Obama’s “I see your point.”
Posted by Christa at 9:52 PM 3 comments:

Yes, it's true. We took Ben to Disneyland.

I could not have imagined doing this a year ago. But Ben's ever-increasing flexibility, his growing tolerance for noise and commotion, and (especially) his love of Disney movies and characters made us reasonably confident that he was ready.

We knew that it was a bit of a crapshoot, but the odds felt like they were in our favor.

And in fact, he did great.

It might be partly because Ben is a kid who can find as much joy in running his fingers along a textured yellow line on the ground as he does on an elaborate amusement park ride.

To sum it up, I would describe our trip as: 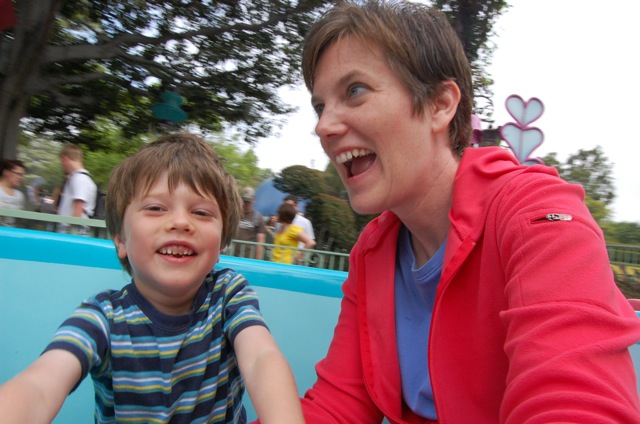 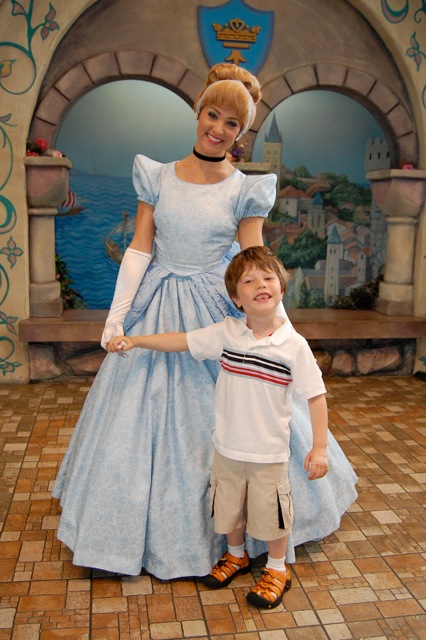 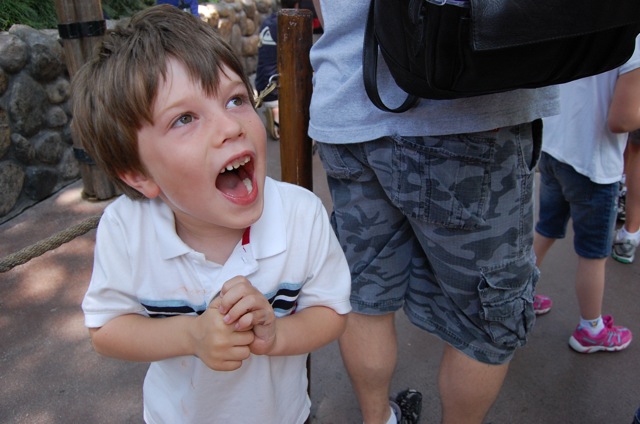 And those are some pretty good numbers. 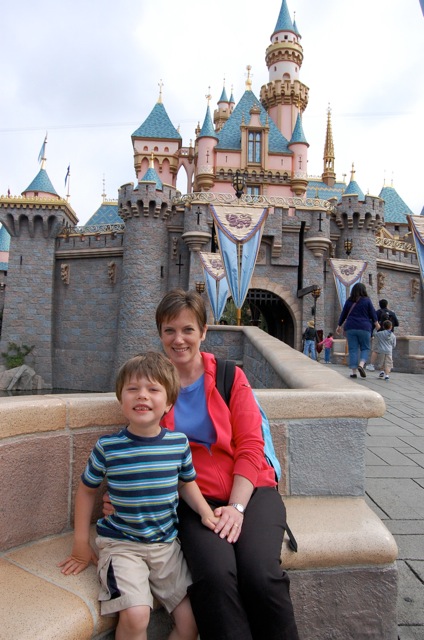