Ben is not a dabbler. He is not a generalist. He is a serial expert. His interests come in waves and they seem to engulf his brain completely.

Every day, for example, several times each day, we re-enact this scene from the 1938 Errol Flynn version of Robin Hood.

(This version has subtitles in French for some reason. We prefer our subtitles in English, at least for the moment. )

I play the Basil Rathbone role, plus any other characters. Ben is Errol Flynn of course.

But in our homegrown version, he's actually not Robin Hood, he's Ben. That's because every adventure story we act out is a chapter from "The Adventures of Ben," a mash-up of three different versions of Robin Hood, Star Wars, and an obscure animated version of Babar.

In the Adventures of Ben, Ben the hero fights the villain, Rex. Rex has a host of nameless henchmen. "Chris" and "Christa" are Ben's loyal compatriots (loosely based on Little John and Will Scarlet). Sometimes there is a wise master who dies midway through the story and talks to Ben as an invisible spirit. This character is based on Obi Wan Kenobi, but is always named, "Martin" after Martin Luther King, Jr.

Side note: One outcome of an Oakland public school education and no solid theology at home is that you pretty much grow up assuming Martin Luther King, Jr. is God.

I can't begin to describe how tired I am of sword fighting and light sabers, of prison rescues and storm troopers, of the same scenes over and over again. But I can't pretend I didn't play a part in encouraging this.

It starts out as something that seems like a positive - even a breakthrough. Maybe it's inspiring imaginative play or creativity, maybe it's something that connects your child to other kids and gives him an age-appropriate conversation topic. Maybe it's just different than the current obsession. ("Great! Something other than trains!")

You start to reinforce it. You start to help him explore it because you love seeing him excited and engaged in something new.

Pretty soon it takes over. Pretty soon it starts to seem less like an interest that connects him to others and more like another perseverative ritual that gets in the way of real interaction.

You wait to see if it will burn out, or just come and go over time.

But this particular obsession, unlike trains, is focused almost exclusively on fighting. If all he's thinking about is defeating evil, does he take that combative mindset to school?

Based on an increase in incidents with other kids at school over the last few weeks, my sense is that it does.

Kids have to explore conflict as they grow up, and I know that boys tend to do that physically. I get that. I'm okay with that.

But how well is Ben able to detach from the emotions of the pretend story? After all, Ben and kids like him are not exactly Jedi masters of their own emotions.

I wonder if the aggression he acts out in the story continues to reverberate around his brain, like an echo. And does his body respond to those mere echoes as real?

So I've started to explore distractions and alternatives. I'm thinking about better ways to set limits without turning the obsession into the even more attractive forbidden obsession. I'm trying to find ways to talk about pretend versus real life.

And so far, it's all been pretty unsuccessful.

If you have any ideas, let me know. I'll either be on the Death Star or in my foreboding castle, with my sword and light saber, and my army of henchmen and storm troopers.

Feel free to drop by anytime. 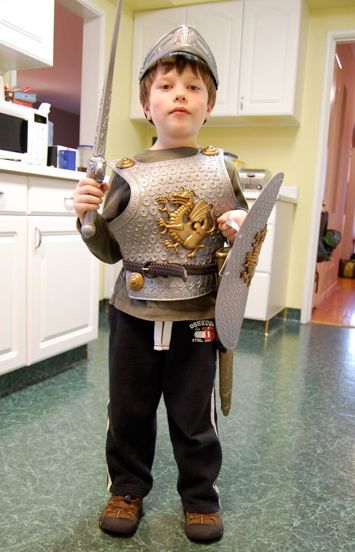 A visitor from the sun

For one thing, we've had days and days of rain, punctuated by oppressively gray days with no rain, and the rare and fleeting sunny day that serves as a cruel reminder of what we've been missing.

I don't ski, so unlike many Californians, I don't become giddy with visions of powder on the slopes when the rain falls. I work at home in a rather dark downstairs room that feels like a cave on days like these.

And the weather is amplifying the general malaise-y feeling I have of being stuck.

But last Friday evening I was momentarily jolted back into good cheer when the sun returned; or more accurately, when an ex-pat from the sun paid us a visit.

I'd better back up a bit.

Two years ago, some friends on our block returned from a trip to New York and brought us a DVD: Gustafer Yellowgold: Have You Never Been Yellow.

Gustafer Yellowgold is a very unusual and delightful character and the creation of singer-songerwriter-artist Morgan Taylor. 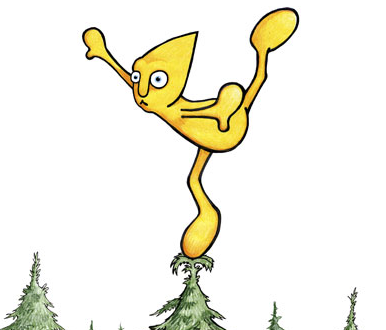 Morgan writes and animates songs about Gustafer, who came from the sun to find a cooler place and ended up, appropriately, in a lake in Minnesota. His friends include a pet eel and a pterodactyl with exquisite fashion sense. His hobbies include eating pine cones and finding creative ways to crush desserts.

If none of that makes sense, it really doesn't matter. His songs and drawings are so beautiful and engaging, so whimsical and dreamlike that you, like us, may convert to the Church of Gustafer after just one viewing.

Gustafer Yellowgold is art that an entire family can enjoy together, and that's hard to find these days.

Sure, there's great entertainment out there that engages different ages on different levels. Pixar is masterful at this. But there's something about Gustafer that doesn't require narrative segmentation, as in: The kids will love this and (wink, wink) here's a little something for you grownups to enjoy.

After becoming quickly enamored with Have You Never Been Yellow? we bought Morgan's two other Gustafer DVDs, we went to a live performance in a local record store, and Ben even dressed up as Gustafer for Halloween two years ago. 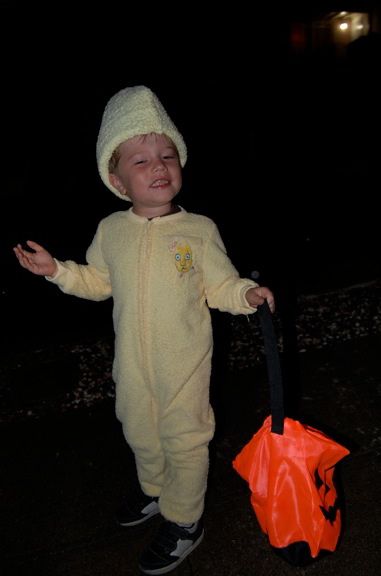 The DVDs are ideal for hyperlexic kids, since the lyrics to the songs are part of the illustrations and kids can read along. The DVDs even include a "sing-a-long mode" where the vocal track is removed - karaoke style - with the lyrics showing on-screen.

Morgan's wife Rachel Lozack told me that more than one family with a child with autism has commented on how attached their child has become to Gustafer.

That might be because the characters' expressions are very simple, and because there's no dialog - only simple animations with minimal movement. This probably makes it more accessible to those who might have challenges processing a lot of information at once.

So, back to last week.

When Chris found out that Morgan might have a free evening on an upcoming west coast tour, he schemed with the same friends on our block who introduced us to Gustafer in the first place to host a house concert where we and a bunch of friends could enjoy Morgan's music in an intimate setting.

It worked, and last Friday, Morgan, his wife Rachel and their little boy Harvey pulled up to our house in a van with Gustafer's face emblazoned on the side. Morgan performed for a group of very appreciative and captivated Gustafer initiates.

Ben got to sing a little of his favorite song for Morgan before the show even had the thrill of being the announcer. "Ladies and gentlemen! Boys and girls of all ages..."

I urge you to go to the web site or YouTube and experience Gustafer's world yourself, especially if, like me, you could use a little extra something from the sun right now. 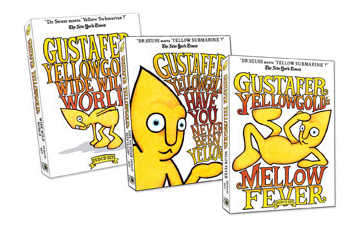