This is the second in a series of posts where I attempt to provide a snap shot of hyperlexia beyond the "my toddler can read" stage. I want to describe some of the ways that hyperlexia might manifest in ways other than early reading.

Ben's brain seems optimized to interact with text. He is often noticing different fonts and unusual lettering. He's wondered out loud, for example why there are two kinds of lower case "a"s. (Single-storey versus a double-storey a, in case you were curious.) And even though he has some fine motor delays and handwriting is hard for him, he painstakingly draws his letters, experimenting with different styles.

He spots typos and editorial inconsistencies like a seasoned copy editor. A few nights ago he casually pointed out, looking at the name of a villain in a Batman book, "It's 'The Scarecrow' on this page and 'Scarecrow' on that page." If there's a typo in the copy on toy packaging - you'd be surprised how often there is - Ben will spot it.

Occasionally, I'll type while he dictates an improvised story, and he will look over my shoulder, correcting any mistyped words or even suggesting improved punctuation.

Once, a few days after I typed a dictated story for him and printed it out, he wanted to go back and change it very slightly. He described the change he wanted to make without looking at the printed story and it was clear he had remembered the text exactly and planned the edit in his head.

His relationship to text is more than analytical. It's emotional, too. He experiences pure delight at unexpected or unusual words or letters. When we visited the main branch of the Berkeley Public Library for the first time recently, he laughed on and on about the Roman-style lettering carved into the cornerstone of the building, even pointing it out to a passerby so they could share in his delight: 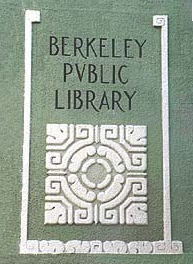 We still refer to it as the Berkeley Puh-vib-lic Library.

Of course, I don't expect that Ben's characteristics are universal for every hyperlexic kid at six or seven years old. But the literature that's out there now often focuses so much on toddlers and not enough on older kids. What are your observations of your older child or yourself if you're an adult with hyperlexia?
Posted by Christa at 3:14 PM

My son is also very interested in silent letters, or words that are spelled non-phonetically. He would surely get a kick out of the PVBLIC library. He also gets a big thrill out of non-Roman alphabets (Hebrew, Russian) and other languages in general. I am curious if this is common with other Hyperlexic kids. Our neighborhood elementary school has a Mandarin Chinese immersion program and I can't decide whether it would be a good idea. He might love learning the Chinese characters. On the other hand I worry it would be overwhelming for him and not provide enough support for kids with ASD.

I love this series that you are doing.

Charlotte likes to play with language. She is especially fond of rhyming. Just recently she told us her favorite color is Scarlet because it rhymes with Charlotte. She's always talking about two boys in her class whose names happen to rhyme.

She does just what you described Ben doing with dictating stories. She will correct punctuation and she will make minor edits here and there - both as I type and later. She has her stories memorized as well. (We type a LOT of stories here!)

It seems that Charlotte still has a love for words themselves moreso than the actual story or meaning the words are conveying. It's just very recently that she is expressing more interest in talking about the stories themselves. She can tell you what happened in a story, but it sounds very robotic. She only just very, very recently is showing emotion about what she's reading. I think that's a good step.

We were just saying in our seven-year-old son's IEP meeting that he has always had a predisposition to the printed word. He reads constantly - walking, sitting, driving, for hours. He read the second Harry Potter book yesterday, after school, the entire thing. He reads FAST and his comprehension is testing in the 96 percentile - something we're thrilled to see b/c we wonder (since he reads so fast). He reads environmental language somewhat compulsively (as do I). I am a writer and editor and an English Lit grad, so this does not completely surprise me. His cursive is beautiful, but he often cries when asked to write too much. They are going to start letting him type this week. Social skills and emotional maturity, however, track more with a "normal" ASD kiddo. That's our "story" for now - in case it helps! (He is not as focused on editing and the visual characters - by contrast to Ben. He is a perfectionist, however, with his own work.)

Our kids aren't hyperlexic. But I think I may need to higher Ben.

This seems SO normal to me. I guess living with a hyperlexic (now 4) will do that to you. What you write seems mondain and everyday to me.

However it is not. I need not forget it.

My five-year-old started reading on his own at age 4, and is fascinated with letters and numbers. He is also in love with different fonts. He once commented on my handwriting with, "Mommy, I like the font you used." :) We never suspected any type of disorder until his K teacher said that he does not socialize with his classmates and gets extremely frustrated when he can't do something the way he wants, such as a cut and paste project. We suspect Hyperlexia, but are just beginning to figure this whole thing out.