This is the third in a series of posts where I attempt to provide a snap shot of hyperlexia beyond the "my toddler can read" stage. I want to describe some of the ways that hyperlexia might manifest in addition to early reading.

I also wrote about The joy of text: the fascinating ways that Ben's brain seemed specially tuned to language and text.
_________

I remember being in a restaurant when Ben was about three years old. As we ate our meal, Ben sat at the table with a stack of books, content to read quietly. A mom at a nearby table, with a boy of similar age, looked over at him and said to me, "You're SO lucky! I wish mine would sit still like that!"

I acknowledged her comment with some humor, and managed to resist chirping back, "And I wish I could get mine to talk to me!"

Seeing a child engrossed in a book probably ranks second only to watching a child sleep when it comes to the Precious Moment Index, so it's difficult to describe how something that so many parents work very hard to promote, to cultivate, to make into a habit can be - at times - the source of a dilemma.

Like other transitional objects, books seem to be healing, regulating, distracting, enveloping and calming.

But they also can be the source of perseveration.

When Ben is engrossed in a book, it's nearly impossible to get his attention by speaking to him. Sometimes even a tap on the shoulder will not be sufficient to break his concentration.

When I manage to get him to look up, he usually does for a moment, until his head is pulled downward again by what appears to be an invisible magnetic force that is beyond his control. It's not that he's ignoring me, it's like he's really trying to look at me but can't.

I gently try to lift his chin sometimes. Again, after a moment of eye contact, the force pushes against my fingers and pulls his eyes and face back to the book. It is not a stubborn act of rebellion or willfulness. It just seems he cannot stop his eyes from returning to the page.

Occasionally, when I try to gently shut the book, he forces it back open, pleading, "Wait, wait, wait, wait!" as if I'm taking away an oxygen machine.

The best way to get his attention when he's reading is for me to lean down and cover the entire page with my forearm or place another object over the page. Not subtle, but effective. 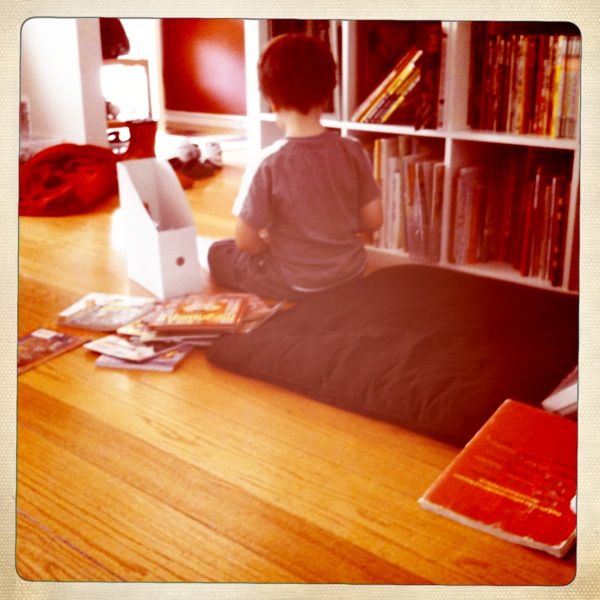 The real dilemma with the book-as-transtional-object situation is that books have become a survival tool rather than a choice.

Because reading is such a socially acceptable activity, I've been happy to let Ben use books to his heart's content to survive restaurant meals, our dinners with adult friends, and other social events that I know won't hold his attention for long. Our bags and backseats are stocked with books we can pull out to delay, distract and disarm whenever needed. They've made our life easier.

But probably as a result, Ben is barely able to sit at a meal without a book. He paces, he squirms, he asks to be excused as soon as he's had two or three bites of food.

Give him a book, on the other hand, and he'll happily sit through a long dinner and clean his plate.

I'm not making much headway with this because I tend to choose nutrition over therapy when dinnertime rolls around, but we have attempted a "no books for the first ten minutes of dinner" project with limited consistency and success.

Which makes me wonder if I'm equally dependent on books - on Ben using a book as a transitional object - as a way of easing the day-to-day, moment-to-moment difficulty and uncertainty.

When a child gives up the pacifier, isn't it really the parent and the child giving it up together?

What about you? Are you ever ambivalent about your hyperlexic child's dependence on books to get through or get out of certain situations? Would your child rather read than face the hostile environs of the dinner table? And how many books are in the backseat of your car right now? 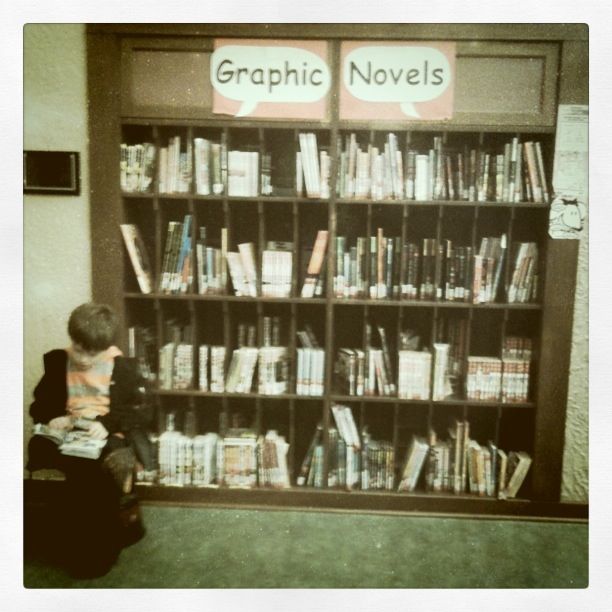