By now, many of you have heard the story...

Once upon a time there was a blogger named Smockity who took her kids to the library one day and found herself next to an autistic girl and the girl's grandmother.

Smockity went home and wrote a blog post about how she considered, "jabbing a ball point pen into her eye" rather than endure the autistic girl's unusual behavior and grandmother's indulgence of said unusual behavior.

I'm going to spare you a link to the original piece (it's gone now anyway) but as you can guess, lots of other bloggers including JennyAlice and MOM-NOS and Jean Winegardner and many others - responded with their own posts about tolerance and compassion and giving kids and their families the benefit of the doubt. A tsunami of backlash eventually prompted Smockity to write an apology.

I don't need to pile on. These posts are insightful and heartfelt and echo my feelings on the subject.

However, the whole incident did get me thinking about situations where I feel particularly self-conscious, where I feel like onlookers like this Smockity woman might be thinking that Ben is spoiled or a badly-behaved brat due to my permissive or inept parenting.

One of those situations is when Ben is perseverating.

Perseverate: (verb) To repeat something insistently or redundantly.

Perseveration probably functions in a few different, but related, ways.

Repetition can be calming, and a way to block out unwanted stimulation. It can produce the OCD-related high of compulsion completion, as Squidalicious describes. It could be the result of pattern seeking. It could be a desire to exert control on a world that often seems chaotic and unpredictable.

One of Ben's current perseverations is to demand that the people around him recite or act out various scenes from books or movies. This is not the hey-let's-play-robin-hood imaginative play. This is an insistent, almost anxious barking of stage directions and lines, often to befuddled friends or family members who don't realize they've been cast in a very SPECIFIC production.

Or it might happen in a public space, where passers-by might not understand how it could be really important for a boy and his mom to stage a scene from Toy Story 2 in a grocery store or museum gift shop.

I'll acknowledge that this particular fixation is a lot easier to disguise as typical play than things like hand flapping or banging objects together. But like most perseverative activities, the problem is less the activity and more what happens when the activity is interrupted.

Redirecting and interrupting perseveration is a delicate task.

I think of dealing with perseveration as trying to untangle a bunch of small fragile necklaces that have become knotted up with one another in a jewelry box.

You can't simply yank them apart or the tiny chains will break. You have to patiently, gently tease them apart. It takes patience, focus and loving perserverence. While you're doing it, you feel like you're not making much progress, and sometimes even making it worse by getting the chains in more complicated knots.

I can't tell Ben, "Just STOP IT NOW!" when he gets into a perseverative mode because this will result in a much more difficult problem than a fixated child.

I normally allow him to continue what he's doing for a bit, but try to find an opportunity to get his attention - I ask him to press the "pause" button on his nose - to tell him calmly that that this isn't a good time for pretending so we need to find a place to say "to be continued..." in the story, or that we can tell the story for two more minutes and then we're going to switch activities.

It doesn't always work the first time. But after a few (or several) attempts, he'll usually agree to the deal. Other times, I can interrupt his intense focus on books or objects by saying, "Ben, we're going to switch gears in 5, 4, 3, 2...okay: switch gears."

I think many of you probably have developed your own strategies of gentle, not so immediate or abrupt, redirection of perseverative activities. You know what it looks like when the chain links are yanked apart and it's not pretty. You know that spending a few extra minutes to gently untangle is so much better than the alternative.

But to an outsider like Smockity, these strategies probably just look like indulgent, permissive, wimpy parenting: "Why doesn't she just tell him to knock it off?" "Who's running the show here?" "Why can't she control her kid?"

The truth is that some chains can withstand a little yanking, but others can't.

Jean Winegardner says it much better, and without the tortured jewelry metaphor, so I'll leave you with this thought in honor Autism Awareness Month.

...I ask that next time you see a child acting unusually, or next time you see a person who is acting in a way that you consider inappropriate, take a minute to consider that you don't know the whole story. Understand that there might be factors at play that you aren't aware of, whether they be behavioral, emotional, medical, or something else. Remember that some disabilities are invisible. But mostly understand that the wonderful diversity of all of our members of society makes our world as a whole better. 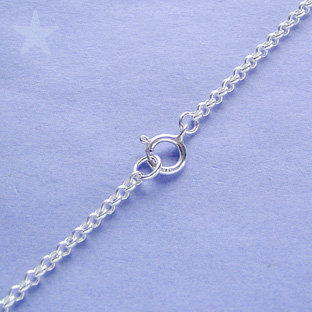 Yeah, yeah Stimey said it all adult-like and what not. But THIS? This metaphor of untangling? My husband, who sees things in such black and white terms, will understand immediately. I'm going to ask him to read it to help him understand why certain things take so much longer for our son than he might like or why I use very specific phrases to help our son transition from a desired activity (perseveration) to a not-so-desired but necessary one.

I have a kid with autism who perseverates but this post has helped me to think about her perseverations a little differently and handling them a little more patiently. Her current one is demanding that we tell stories about various scooby characters. Not complying is ... Not good.

Oh, I LIVE in those scripts. I have two of them who feed me lines over and over. It drives me crazy, but I try to understand.

Thanks so much for appreciating my post. I'm glad I was coherent. :)

Well-said. I love your posts and your perspective. Thank you for this.

Very nice. Perseveration here has spilled into what others probably see as "backtalk." If you tell Joey to stop doing something, his first reaction is to say something- usually something expressing frustration. It isn't something under his control, it just comes out of his mouth. That is very difficult for people to understand; what they see is a rude, sometimes shouting child. The idea of it being a perseveration, his way of processing what it happening and his frustration with being redirected, just doesn't even occur to anyone.

The timing of your post is very valuable, because one of the main things we've been dealing with lately is Isaac's fondness for recitation. As I type this, he's offering a very heartfelt rendition of Marlin's scolding right before Nemo get snatched away by the diver. A little bit ago, he was quoting the lead singer of "The Killers" from some concert footage he enjoys watching. He seldom needs our participation in this ... he just wants to quote. At the dinner table, in the grocery cart, going to sleep at night.

You know how you hear a song earlier in the day and later find yourself humming it, unintentionally? Then you realize it and stop, only to unconsciously start again later? That's what Isaac's quoting is like. It's his "humming" ... but with language.

But then we get into the murky waters of parenting a hyperlexic. Do we stop him? When? How often? Will he outgrow this? Is allowing it harmful? Is it a natural part of his progression with language?

The information on hyperlexia is so limited that it's hard to know what the right things to do are. When are we letting him continue in a bad habit vs. trying to force a hyperlexic peg into a neurotypical hole?

Any advice is appreciated. Do we let Nemo put his fin on the boat, or not? ;)

Stephanie, very interesting comment. Many of us can get one of those songs into our heads that we just CANNOT break free of. Personally, I sometimes feel an overwhelming need to whistle the tune, or sing it, again and again. It can go on for a couple of days. Then I imagine myself as a child who has a hard-to-control desire to follow a script, over and over again. It helps me understand the situation. And it also helps me understand why those of us who were rabid Monty Python fans in the mid-70s cannot hear one phrase of a Monty Python routine without reciting the whole scene to the end. (Highly annoying to the uninitiated, I might add!!!)

I absolutely love this metaphor of untangling the necklace. I also like your idea of "Switching gears". I am going to use the countdown method the next time my Zion is "perseverating" on the Ghostbusters Stay- Puft Marshmellow man.

I hope that I can have as much patience as you!

Thanks for this metaphor of the untangling necklace. To me, it actually FEELS like whimpy and indulgent parenting still. I have a hard time feeling like these strategies are OK. But I KNOW THEY ARE!!! He can't handle it, as you describe. So, we do the same types of things... 5...4...3... and the 'Ok when your 2 min's are up, you need to turn the game off' (he talks about it in terms of it being a game right now).
Thank you!

Stephanie.... can I offer some words that someone spoke to me that help me understand why our *hyperlexic-murky-parented* kids NEED us to help them STOP when it's inappropriate? (b/c I too have battled with this exact thought process recently and have finally settled on I HAVE to).

Think about your child in 10 years, standing in the middle of Times Square ---- will it be ok there? If not, you gotta do something about it now.

We are trying to find that 'time and place' for him. It's going to be a long road.

FWIW I am reading 'Parenting your Asperger Child' and I find it is just about the BEST book I've ever read re:my son. It might be worth a shot.

Nice blog you got here... Just droppin' by to say hi! http://www.arts-and-entertainment.info